What's this blog all about?  This word cloud from Wordle pretty succinctly sums up my major themes from the last several months.  Apparently I like ecology a lot, but not as much as the number one. 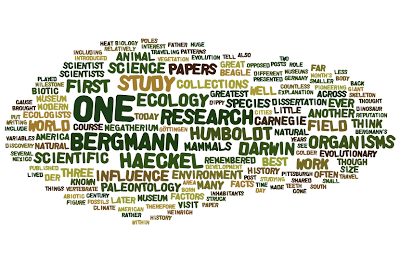 Humboldt, Bergmann, and Haeckel: The German Roots of Ecology

One of the axioms of science is that any report on your research should include a thorough overview of the topic it addresses. This often means that introductions to scientific papers include some very old citations (for some authors, trying to find the oldest publication you can legitimately cite has become a game, and a pretty fun one at that). I'm in the process of writing the first chapter of my dissertation on the influence - or lack thereof - of climate on body size evolution in mammals, which turns out to be a very long-standing area of study. In working back to the roots of the debate, I've found myself returning to three papers from the early to middle 19th Century, one of which has a direct bearing on my research, another that is a little more tenuously connected, and a third that is only indirectly related but has a profound impact on everything I study. These papers were written by three very different scientists who were studying very different groups of organisms, but all three papers share one major commonality and, as I hope to convince you, several smaller ones as well. 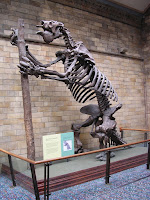 FVOTM is back from its extended holiday vacation, and because February 12th is Darwin Day, this month's vertebrate is an animal that played a crucial role in the development of evolutionary theory: the giant ground sloth Megatherium americanum.  The species would have been familiar to Darwin before he ever departed on the Beagle: it had been named in 1796 by no less a figure than Baron Georges Cuvier and its size (comparable to that of a modern elephant) and bizarre combination of traits (such as teeth without enamel and claws that the animal evidently walked on) had made it immensely popular.  Darwin himself uncovered fossils of Megatherium - as well as the hippo-like ungulate Toxodon - at Bahia Blanca, south of Buenos Aires.  While it is impossible to pinpoint exactly where or when Darwin first began to understand the patterns that he would later use to support natural selection, his recognition that Megatherium shared many features - including its apparently aberrant teeth and claws - with modern tree sloths certainly represents a milestone, as the great scientist would himself acknowledge in the opening lines of his epochal On the Origin of Species: "When on board H.M.S. Beagle, as naturalist, I was much struck with certain facts in the distribution of the inhabitants of South America, and in the geological relations of the present to the past inhabitants of that continent.  These facts seemed to me to throw some light on the origin of species - that mystery of mysteries as it has been called by one of our greatest philosophers."
Posted by John D. Orcutt at 10:27 No comments: